Friday October 9th, we were invited to a showcase and an interview with Judith Owen and Leland Sklar at Engelen in Stockholm Sweden. Judith with her critically acclaimed album Ebb & Flow is touring together with Leland, Russ Kunkel and Pedro Segundo. These are no musical rookies, as this is Owens’ eight album and Sklar creating the 70: s troubadour sound and is behind studio recordings with artist such as Linda Ronstadt, James Taylos, Hall & Oates, Jackson Browne, Phil Collins, Clint Black, Reba McEntire, George Strait and many, many more. So with huge anticipation we sat down in the Rhapsody Lounge to see and hear the duo… 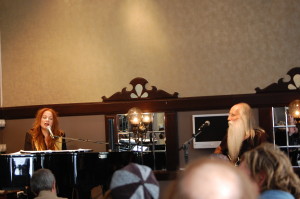 The Lounge itself was quite small and intimate, which suited the music superbly. The duo alternated songs from the latest album with a few covers, amongst others Joni Mitchells’ Blue. As Judith described it; a political incorrect song but yet one of her favourites. Her chat between the songs was fun and quite a contrast compared to her songs. The duo projected joy from the stage and it was mirrored in the music. At one point Leland thought she was talking too much and said; I was shaved when you started to talk…

After seventy minutes of a lovely performance, that shouldn’t have left anyone disappointed, we had a chat with them both. We started with some questions for Judith. 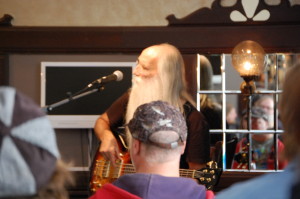 Could you tell us about your musical journey?

It starts with that I am from Wales, in Wales we sing. My father was an opera singer, which meant that I grew up in London with opera performances each weekend. I was surrounded by fantastic musicians. There was music in the house at all times. They sang and I played. It started with the piano. My sister was a great musician; she played after notes while I played after my ear. I learned to play that way since I am not able to see symbols, it is a sort of dyslexia I have. Anyway, in our home there was classic music, but also jazz, gospel, folk music and depressing Welsh music. All of this got stuck in my mind.

Every Sunday we went for a drive on the country side and we sang in the car to Frank Sinatra, Ella Fitzgerald and James “Chello”. It was the first time I heard this kind of music, personal music describing difficult experiences. I loved it. And later I have had the chance to work with these musicians. I canalize… it is the closest thing to flying, that s how it feels. I actually started as an actress; I didn’t want to follow in my father’s footsteps. But later I met my husband in London and I followed him to America and started my musical carrier and have continued since.

I went back and forward between England and America to be able to see my family, but in 2012 my father fell ill and died. That’s when I decided to make the album I had wanted to for many years. It was like a love letter to the music I grew up with, and which made me the musician I am today, a sing and songwriter. I met Leland through my husband, we clicked immediately and we started to work together. This album was really important to me, truly important. Due to my childhood memories this album was conceived, it’s the best studio experience I’ve ever had.

You recorded live at the studio?

Yes, I always record live and with these guys it felt very natural, that’s how it started, playing live, nothing artificial just straight dub. I was very nervous as I was working together with people I love as musicians. Since it doesn’t automatically means it will be good.

A lot more difficult. Like when I played the first time, they were all there listening. Russ Kunkel, Lee Sklar and Waddy Watchtel were listening and watching, and then they went out to play and to find the right key. After the second bar it was done (Judith snaps her fingers). Like the most natural thing in the world! Their competence… They said to me that their job is to make my singing shine and not be in the way, not cover it up but to bring the singing to its right and it feels very special. Then they are very fun people to be around, which is great because I have a need to laugh since I am a very serious person.

Yes, or like ebb and flood. That’s what it means, high and low. Like my album’s title, sometimes it feels like you have lost everything but then it all comes back again like a cycle. This is how I usually describe myself, a serious person with a great need for laugh.

You appeared on The Simpson’s…

Yes, I actually did… It’s really funny because I had a nose big as a foot. A nose as a gigantic bird, like a toucan. An incredible big nose. But it was one of the best things I have experienced, to be animated. It was amazing. 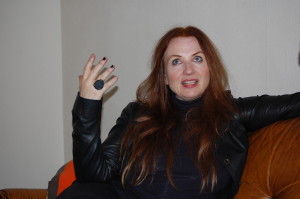 Did you feel honoured?

Yes, very much. When I sing it makes me feel good, it’s a privilege to be able to do this, to know that other people appreciate what I do, I am aware of how privileged I am. And this with The Simpson’s is really something extra. They asked me if I could sing the theme song at the end for next year, amazing!

Have you ever played together with your sister?

She doesn’t play anymore. She were the one who did all the examinations, she was a classic musician. When you play classical music you need to practise and practise and then practise a bit more and as a child in that you lose the joy. I need to be more of a free spirit, I need to be the composer, and it was my dream. My sister is my biggest fan. She’s a psychotherapist, so I believe that we are both helping people dealing with their feelings and thoughts but in different ways. Different but equal in some weird way. 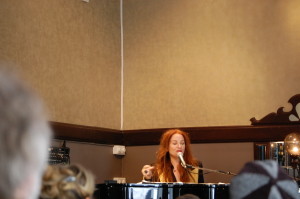 You have a tough schedule when you are on tour?

Do you get any spare time?

I have a day off tomorrow, which I really need. It’s tough when you are a singer. You need to let your voice rest. It’s the only instrument you can’t just turn off. I like to go out and see the cities I visit, and I intend to see as much of Stockholm as I can tomorrow. I have a tough schedule but I am very strong and disciplined. Early evenings, lots of sleep, no talking, no drinking and eating healthy and working out.

No, no! Not with my way of singing. My father was an opera singer and knew that, and I understood this as a little girl by watching him being careful with his voice.

How do you train your voice?

By opera exercises. Singing scales, you need to warm up but it’s definitely scales. Things to open up your throat. Each muscle must have their own part.

Is this something you do everyday?

Everyday before I sing.

You have a new record company…?

I do but it’s basically the same company, I swapped distribution company and it is foremost the label that is different. Nothing terrible behind the swap…

Can you share any fun memories from your touring?

Each day, every moment, let me see… I can share that today during the show I looked out on the audience and thought; this goes really well. And I nearly totally forgot where I was in the song… And Lee played the same part over and over again, to me that was frightening, I was totally gone, frightening isn’t it Lee…?

Leland: I didn’t think it was frightening, I had a nice time!

Judith: I was playing and thinking what a delightful room, which made me, play the same part over and over again.

Leland: It’s never happened before, it was just for a moment and nobody realized…

Judith: When the band follows as good as they do, it’s easy to have fun. We’re a tight band.

Leland: We are very much alike.

Judith: We laugh a lot and do silly things together.

Leland: It’s an adventure every day. 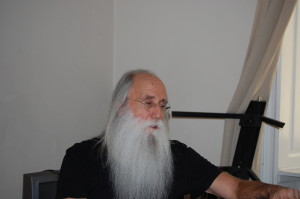 Leland, you started your career playing the piano…?

Yes and all due to Liberace. My parents used to watch his TV-shows and as a child I used to sit together with them and watch… And it was amazing to see him with his tail-coat and candelabras on top of the grand piano. I fell in love with that and we used to have a piano in the house, but to take on that as a child was like a Normandie. At the age of twelve, I was a complete wreck, burnt out (laughter). But I was lucky when I started high school they told me; there are fifteen people playing the piano but we need someone who will play the bass. So they hug a bass around me neck and let me play a note and I was sold. When the vibrations from the bass went through my body, I felt that this was what I wanted to play and left the piano behind me.

So you never play the piano at all now?

No, Leland says and Judith continues: I have never heard him play.

Leland: I will never touch a piano again. I am happy playing the bass.

Judith: Since Lee is a pianist from the start I believe that it the reason he’s doing it so well, he plays the bass more like a guitarist. He moves around his fingers a lot and sometimes he’s quite reckless towards me, and most of the time he’s moving around a lyrical path. It is hard to understand a piano, but he’s doing it quite well.

Leland: James plays the guitar like she’s playing the piano. It’s flat picking and plat plocking, so I have to figure out a way to copy his playing… That’s my challenge. Before I met James, I played music like Hendrix, Cream etc. I was a hard rock bass player. Hen I met James whose the most sensitive guy in the world and I had to simulate the whole thing. Which is something I embrace, I love it! I like the idea of thinking about how I can be involved in the singing, and give the piece good backing. I don’t have an ego that needs to be satisfied anymore, which some guys have; they just want to shine…

Judith: It’s fantastic, fantastic! And it’s free and liberating and the most musical way I believe.

Leland: I don’t have to do anything from the scratch. She (Judith) doesn’t need me here; it’s just nice to share the stage together. She has had many years as a solo artist so she could easily sit behind the piano by herself and it would sound amazing.

Judith: But then we wouldn’t have as much fun and it wouldn’t sound as well!

Leland: She said it!

Judith: The music would sound all alone and it would be very lonely on stage…

Svip.se would like to thank Judith and Leland for sharing your showcase and time with us and wish you many fun and musical moments on your remaining tour.