The beautiful Björkborn Mansion in Karlskoga has a historical past and is by itself the only reason for the existents of the Nobel price. Everything begun in 1893 when a famous man called Alfred Nobel, back then living in Paris bought the companies Bofors and Björkborn in Karlskoga Sweden, where also the mansion was included in the price of one million Swedish kronor. Only three years later he moved his laboratory to San Remo Italy where he lived up until his death on December 10th 1896.

Although Alfred Nobel spoke five languages, he wrote his will in Swedish and left 33, 2 million Swedish kronor to a foundation whose interest would be given away as awards to people who on an international level during the past year had made a difference to man kind. A conflict between the court in Karlskoga and the Supreme Court in Paris arised when the will were to be prosecuted. In France they regarded Paris as Alfred Nobel’s home and naturally they wanted a part of his wealth, while Mr. Ragnar Sohlman, a chemist of Alfred’s had to work for the will to be prosecuted in Karlskoga and for the foundation and the five contemplated awards to become a reality.

The Nobel price become an actuality

Thanks to Mr. Ragnar Sohlman, three white Russian stallions and the Björkborn Mansion, an extraction from the French law was used and it said: “Where a man keeps all of his horses stalled, where he himself feels at home.” The will was prosecuted in Karlskoga district court and the foundation of the Nobel price became actuality. Five years after Alfred Nobel’s death in 1901, the first five awards were given out…

Today, Björkborn Mansion is a museum open for the public to enjoy. One of the several experiences on the mansion is that the visitors have the opportunity to meet Alfred Nobel who in person tells the story of his life, his inventions and about Ragnar Sohlman’s struggle to implement the Nobel price. Svip.se met the actor Peter Sundh who performs as Mr. Nobel with humour and striking similarities…

300 tours during one summer

During eleven years Peter Sundh has personified our Swedish pride Mr. Alfred Nobel and during one summer season there are approximately 300 guided tours, all with the exact same engagement and professionalism. The tours are done in both Swedish and English and believe me when I say there is no difference between them; they are interesting and entertaining regardless the language. 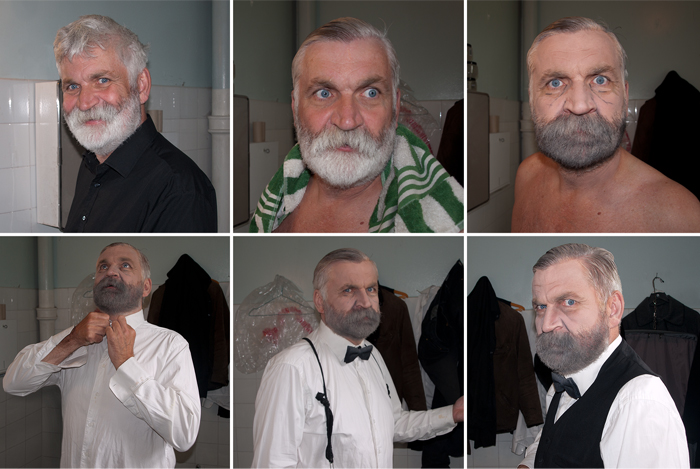 Each morning Peter has a ritual to mentally prepare himself for his role as Alfred Nobel; we sit down over a cup of coffee together with Peter in the stunningly beautiful surroundings of the mansion. We small talk a little about what he does when he’s not at the museum and Peter is a man with plenty on his plate… This autumn there will be a children’s play and at the moment he’s reading an audio book of 450 pages. After our coffee we walk over the mansion garden and in to the estate. Here, in the middle of Nobel’s belongings, Peter has his “dress room” in the shape of a bathroom with a hand basin and a shower; it is here the transformation takes place every day during the season. The clothes Peter is wearing are from the 19th century and the transmission from Peter to Alfred is a joy to witness. A weird feeling though to be standing in one of Alfred Nobel’s guest rooms and feel history breathe down my neck.

As said earlier it is difficult to separate Peter Sundh and Alfred Nobel when on site, something Peter live with in his private time. You could easily compare Peter’s situation to an actor from long run TV-shows such as Bobby Ewing or Patrick Duffy which is his real name but who’s always going to be Bobby Ewing. Peter is Alfred Nobel to most people but underline the importance of being able to be private outside of Björkborn Mansion.

The guided tour starts in the dining room where the Swedish king Oskar II once sat around the table for an eleven dish meal in just three hours. Through out the tour Peter does not only give a fantastic and informative dialog, but also make his time to answer questions from the visitors, who laugh and converse. There are no doubts that people are enjoying themselves and the way Peter tells the story makes you forget it is not Nobel who’s standing in front of the group and the 45 minutes we are able to join Peter around the mansion just give a taste for more. 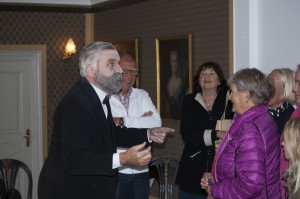 Despite his striking similarity and unbelievable knowledge, Peter has never been invited to the Nobel celebrations. Strange one might think…
Yet Peter has met one of the awarded and was fully dressed as Alfred Nobel, when he nearly scared the life out of Mr. Barry Marshall during a dinner party at Örebro Castle.

Since it is very difficult to separate Peter and Alfred, svip.se take the opportunity to do a short fictive interview with Alfred Nobel and we are invited to the kitchen in the newer part of Björkborn Mansion and have another cup of coffee, but this time with the inventor of the dynamite…

You have been called “Europe’s richest vagabond” how do you feel about that statement?

In 1876, you advertised for a woman. ”Lady skilled with languages, likewise in a steady age, as secretary and housemistress”. Was this one of the first personal ads?

Yes, you may call it that… there are many people who say that and I’d like to say that my intention were perhaps not just a housemistress, no. But foremost when Berta Kinsky as she was called at the time and who later became Berta Von Sutter replies to my ad. That is when I realised it became a personal ad. She spoke four languages, she knew bookkeeping, and she knew everything, what a match! Berta Kinsky understood my interest in her and just after one week, she took me aside, in Grand Hotel in Paris and told me that she was engaged, nothing can happen between us, she said. After that I was going on a trip and she was gone. We keep a good contact and shortly after she married Von Sutter. But I probably thought we were going to be an item… so yes it can be seen as a personal ad!

You also wrote poetry and a play for the theatre, would you please tell us abut this?

Yes, a play in four acts, a tragedy and it was a tragedy in its self. It was set up about three to four years ago at the Strindberg Theatre in Stockholm. It ran for two weeks and was then closed down… Probably because it was done after my original script and that was not a good idea. I was a writer and did well with writing books, mainly poems but I was not a good script writer.

Your now day’s famous Russian horses were they business or pleasure?

It was three Orloff stallions who were to be used with the wagons only. We had major problems with them, they came from ST Petersburg with neat streets and then they came here to Karlskoga, a mud hole. They didn’t do well and we were about to get rid of them, but we didn’t and that was lucky! They were real trouble makers to horses and even caused damages to Ragnar Sohlman, but it was lucky we kept them in the stable… 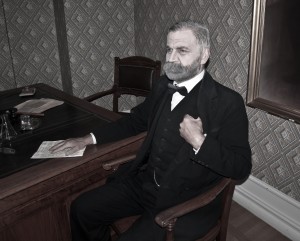 Svip.se would like to thank Peter Sundh and Alfred Nobel for your time and an amazing experience at Björkborn Mansion. This guided tour brings a superb insight into one of Sweden’s most important man’s life and death and this is a tour we strongly recommend!