At the end of November The Gloria Story released their third album;”Greetings From Electric Wasteland” and in December they hit the road and left for their Europe tour along with The Quireboys. Both album and tour have had great reviews.
Svip.se had the opportunity for a phoner with the lead singer Filip Rapp from the tour bus on their way to the next show.

No pause between the gigs?

Some of the transport distances are long. We’re about to travel ten hours. We had a show in Stockholm yesterday and tomorrow we’ll be in Stuttgart. We had to pack our gear and leave. But once we hit the continent, there will not be as long distances as this. It’s nice for the throat to have a day off.

Is it you who’s writing most of your material or do you write together?

This time around it’s me who wrote the songs. I compose the song with my musical limitations and then we make the music together. As the composer I guess it’s me but I am very dependent on having a great band that is able to make it into ready music. 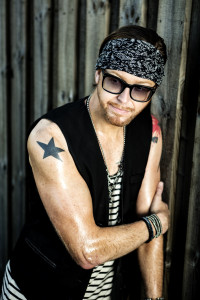 Where do you get your inspiration/ideas from?

Quite often you have a certain taste in music. I usually sit down and write a song that I would like to hear myself. I have a soft spot for 70: s rock. It’s that kind of DNA that I take with me when writing my own songs. Sometimes it can be a strophe inside of my head or I’m inspired by something that has happened, but mainly I sit down with my guitar and look for a groovy riff and build a song based on that. Sometimes I think this sounds a lot like an old Kiss song, and when that happens I make sure nothing will be stolen from that. You don’t want to do a rip-off, and this is why you end up very far from your inspiration source in the end.

Ha ha. Exactly. But it’s almost impossible to not slide into that genre as we do, which is classic rock or rather 70: s rock, as we have the legacy with us from our idols that we grew up with. If you just love Kiss, Thin Lizzy, Cheap Trick and Slade that is what you take with you when writing songs you’re self.

Did the band members grow up together, as the band’s from Skövde?

No, one could really say it’s a Skaraborg’s band. Some of us are childhood friends. After that likeminded people with the same ambitions and similar driving force joined in.
This is something that’s very clear when working with music at a professional level, everybody has to have the same level of energy and drive, and it’s not going to work out otherwise. At the moment we’re out on a twenty day long tour in Europe. It’s not a given thing that everyone is able to do this. But all of us in the band are doing this because we really want to.

You’re on your third full length album. One used to say that the third album is the decision making album for the band?

Yes and it feels like everything has fallen into place now. The third important album. It’s nothing that we have thought about. It might take two or three albums for a band to know what one should be doing. To find out the band’s strengths. It feels like for each album we’ve put behind us, it has taken us a step closer to our goal. This time around it feels like we’ve made an album that the whole band can stand for at 110 %. We like to listen to this album, which has not been the case earlier, as we have been deadly tired of the songs the minute it’s been released. Our new album is being played in the tour bus.

Do you remember your first bought album?

Crazy, crazy nights by Kiss was the first album I bought. It was during the 80: s. A lot of that era’s chewing gum pop was probably the gateway for many people to slide in to hard rock. You could see and hear that there were a lot more substance, basics and feeling in it and that made it much more interesting in my mind.

And it has kept up with you?

Yes, but it’s very rare that I listen to an 80: s record with Kiss these days. There was a lot of great music made during the 80: s, but Kiss didn’t really have their high lights at that time.

You’ve been touring a lot; do you have an odd/fun tour memory to share?

The weirdest thing was probably when we went on stage at Sweden Rock and played for five seconds and then the main fuse for the entire festival area went, everything died. We could hear the man from the falafel wagon screaming that his frying hob died. There was a scary silence with seven thousand people in the audience and you are so depending on the electricity. You feel quite vulnerable. At that point one is happy not to play in a gloomy death metal band, they wouldn’t have made it in a situation like that. We went out on stage and did a bit of community singing and our drummer made a solo thingy. After five minutes the electricity came back on and we just continued as nothing had happened. That’s the advantage of being a gang of happy geezers, to be able to have fun and enjoy things at all times.
There are a lot of things happening when out on the roads. All the people you meet, it’s a very social thing to be on the road. You travel from city to city and meet like-minded people, which is the great part of it. You get to do what you love for people that like what you do, it’s so cool.

Otherwise it might be a struggle being on tour?

You describe yourselves as ”a quick fix, not to save the whales or the rain forest, but to save your next party”.

Exactly. We’re not trying to solve the problems around our world, but we are rather trying to offer an escape for about 40 minutes. You can put our album on and see it as a counterbalance to everything bad. If someone wants to listen to us and gets happy, a lot is already won.

A little bit of difference compared to Bono in U2…

I went to their concert in Stockholm. It’s very easy to stand there and say ”welcome refugees”… when you have 700 millions of dollars in your private bank account. I feel he has to give away 690 million of dollars before he’s entitled to open his mouth. Our band members all have a strong social commitment, but I feel it stinks when travelling around the world making millions on the social commitments. We rather treat you with a good party when we play to be honest.

Are you able to live on your music?

No we’re not. When we are touring we are happy if we break even. Then again we can always take out a fair amount for a gig and we sell albums as well. We are trying to reinvest everything into our band and the equipment, so we can do more shows. There are six of us who has to take time off work, so it’s not a matter of a huge profit; I usually say that there are more kinds of accounts than your salary account. You also have the soul account that needs to be filled up and that’s the account you fulfil when out playing.

Both for you and your listeners…

Yes that’s what we hope for. At best it will be a nice and positive energy response. We give a lot of ourselves and have a lot back from the audience. That’s what is ”the power of rock´n´roll”. 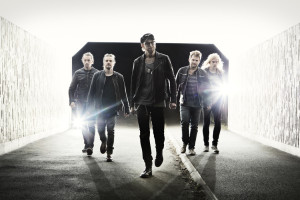 How did it feel at the start when you were the opening act to more established bands?

A pretty cool experience to get to meet all of these originals. We’ve now been out with The Quireboys and earlier with Black Star Riders, who are bands I used to listen to growing up. Our old idols. It’s such a cool feeling getting to know them and to do something fun together with them. These old geezers are very nice. You don’t last very long in this business if you’re self-centred and wear the high-hat. It’s very down to earth kind of people who are nice to go on tour with.

You do get a bit starstrucked. Like the first time I said hello to Scott Gorham (guitarist Thin Lizzy), my knees were quite weak. He is one of the reasons I started to play music at one time.

Do you have anything planned for 2016?

There will probably be a few club gigs during the spring. And in the summer we will show up at various festivals. We’re playing at a festival in Ibiza and we’ll do a small tour in Spain.

Your employers get nervous each time you’re heading out?

How did your interest in music begin?

I think it was as a kid growing up during the 70: s in a very grey and dull environment. Middle school was a little bit like a protected work shop. A bit too protected I think. I discovered rock music and felt it was exciting. Reading magazines such as OKEJ, giving me the opportunity to discover another world of reality. That’s how the music interest came about as it offered something else but the rainy asphalt on the school yard in Skövde. Also it made you want to develop yourself along the journey.

So there was no municipal music school then?

With a recorder! Ha, ha. No, I’ve taken a few vocal lessons through the years. The other guys in the band had private classes and went to music schools. But I feel that there is no better school then being out on the roads and play. It’s taken us five years to get the right mixture of band members and have the right feeling.

So you get to learn the hard way?

I believe so. There are so many young bands standing around in rehearsal facilities, but what’s going to happen there?
Off course you have to rehearse but you learn ten times more playing live than you do rehearsing. Everything has to be tried out live in action to get it to stick properly.

And to get the response…

Exactly. Get to see what’s working. It takes a few years to know how to build up a show. How to stash songs on top of each other. How to build a live set that is interesting. It’s almost like building up dramaturgy for a film or similar. You have to aim for a knock out from the start and keep the interest all the way. That’s a knowledge in it self.

Is there a lot of partying during the touring?

If you are referring to drugs, it’s not a lot of that in this business anymore. Not many people have the strength to carry on with that. There’s no lack of opportunities to party, but it’s mainly about having a few beers after the gig and some fun party. But at the same time, we are out to do a great job and it would be very pathetic to go out on stage not being able to do what you came for. Most people are doing fine and especially singers. You can’t do this otherwise.

Svip.se would like to thank Filip Rapp for the interview and wish the guys in The Gloria Story good luck with your career.