Skip to content
Reklam
During May Robin Trygg has been on the pike of two of the world’s highest mountains. The pike of Cho Oyu, 8,201 metres together with the top of Mount Everest, 8,848 metres. On Mount Everest his second time. Robin and Göran Kropp are the only Swedes that have climbed the mountain twice. That this was a tough journey, you get from Robin’s comment:”My body is washed-out and I have lost nearly 15 Kilos which means I weigh 70 Kilo. The last time I weighed I was 16 years old.”

How did your interest for climbing start?

I moved to Corsica right after high school and started a job. I had never climbed before; I used to lay football when I was younger. By coincidence people I had got to know were climbing, so I tagged along and was really bad at it, but I enjoyed it. So back in Sweden I told my one year younger brother (who does everything I tell him to do), that Kilimanjaro would be cool! You could walk up that mountain so it wouldn’t be too hard. But it was

That didn’t discourage you?

No and after that it just continued with higher and higher mountains. I took one step at the time and learned to use an ice axe and a climbing iron etc. 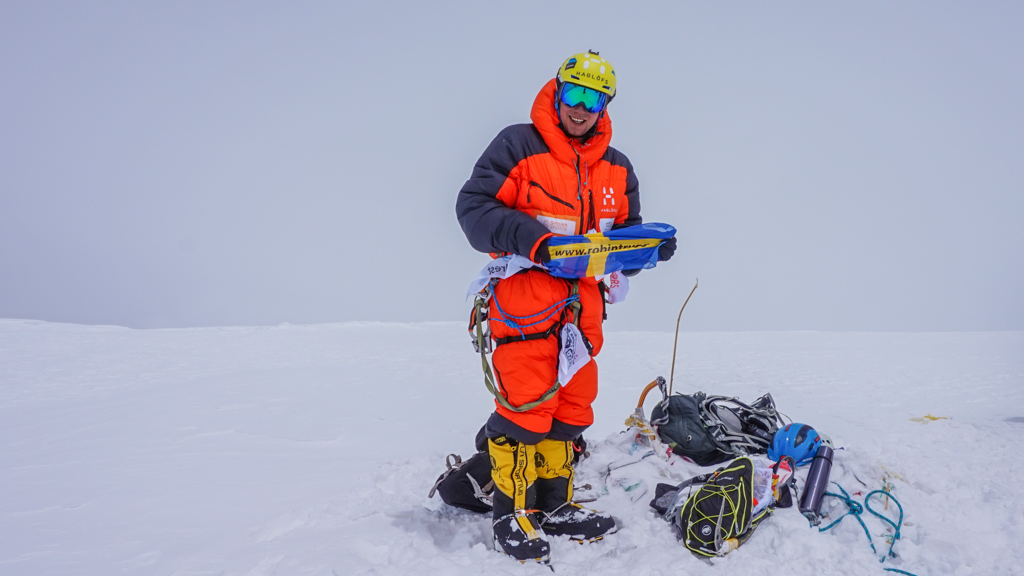 Is your family in to climbing as well?

Not at all. So this has been a completely new world for them.

As an alpinist one has to calculate risks?

Absolutely. It is one of the major parts, the most important part. I have never gotten myself in to things that I don’t feel I can handle. Before the Cho Oyu tour I reserved four years to be able to implement it in a safe way. When you’re talking about climbing most people just think about the expedition it self, the two months you’re away. But there’s an enormous amount of training and preparation behind.

I understand this is physical but also a mental preparation demanded…

I would say that the larger part is mental. I was in hard training before this tour, the muscles I worked to get; all disappear after a while anyway. I lost fifteen kilos during the climb, so most of it is mental training. To have decided, to turn around to make a decision when you are close to your goal, in case it’s too dangerous.

Is the weather erratic on Mount Everest?

These days the forecasts are quite good, although you can’t be 100% sure. I have always looked at several forecasts, so I can put them together and when all look good at the same time that’s when I try to go. But naturally I have ended up in bad weather and it’s been everything but fun.

I imagine its cold up there.

Yes, cold and windy. Like the time I tried Cho Oyu without oxygen. I had reached about 8,000 metres when four of my fingers turned black from frostbite. I had to use oxygen in the end. 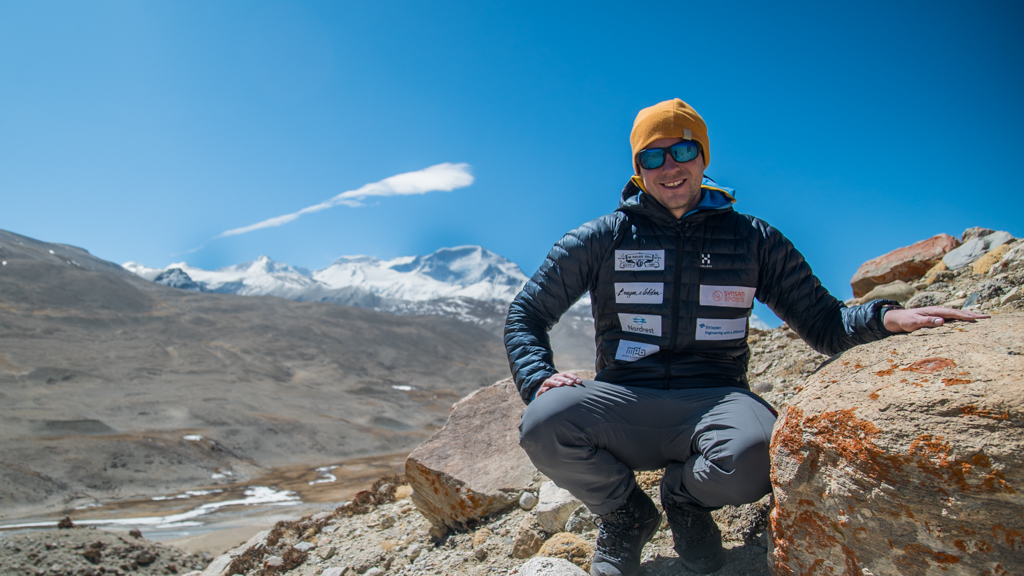 There has to be a risk of cut-offs?

Exactly. If this had happened when I was younger I had probably continued anyway since I decided to go without the oxygen. But when you’re older and prioritize different, I chose to use the oxygen. This time around it all went well and in retrospect I am glad, so one has matured a little bit.

Is there a lot of apparatus left from prior expeditions on the mountains, loops for example?

A lot, especially on Everest. We first climbed Cho Oyu which was awesome since we were nearly alone on the way up. There were no set ropes since no one had climbed there in a year and a half. It felt like a new tour, incredibly beautiful. And then we came to Everest and it was the total opposite. So crowded, old ropes and a lot of people that actually couldn’t climb or knew how to use their equipment. It is an entire industry on that mountain that doesn’t exist on any other. So a lot of the charm gets lost because of this.

How many of you were there in your expedition?

It was me and my friend Chhiring who’s very skilled. He grew up in a mountain village in Nepal on 4,200 metres.

So now you have climbed Everest from two sides, the south side and the northern side…

Yes, from Nepal and Tibet.

What differences is there? I can imagine you have the sunshine in your back from one of the sides?

Ha, ha and more shade on the other! I feel that the Nepal side is so much more beautiful, because there you climb up through the Sherpa villages and you are surrounded by gross vegetation to start with. You see waterfalls and walk over suspension bridges, it is fabulous, dreamlike. Whilst when you go via the northern side go by car all the way up to base camp. You reach the Tibetan tableland which is very barren, just rocks and ice. Very beautiful but in a different way. I feel that Nepal is more beautiful but the ice fall on the southern side, I don’t want to go through again. That was scary.

It is a large glacier, like a city of ten story buildings. Everything is moving about one metre a day. It collapses and crashes and you have to walk through it. We did it early in the morning before the sun came out so it would be still. It is that part that I don’t miss with the southern side, but the rest of it is beautiful. 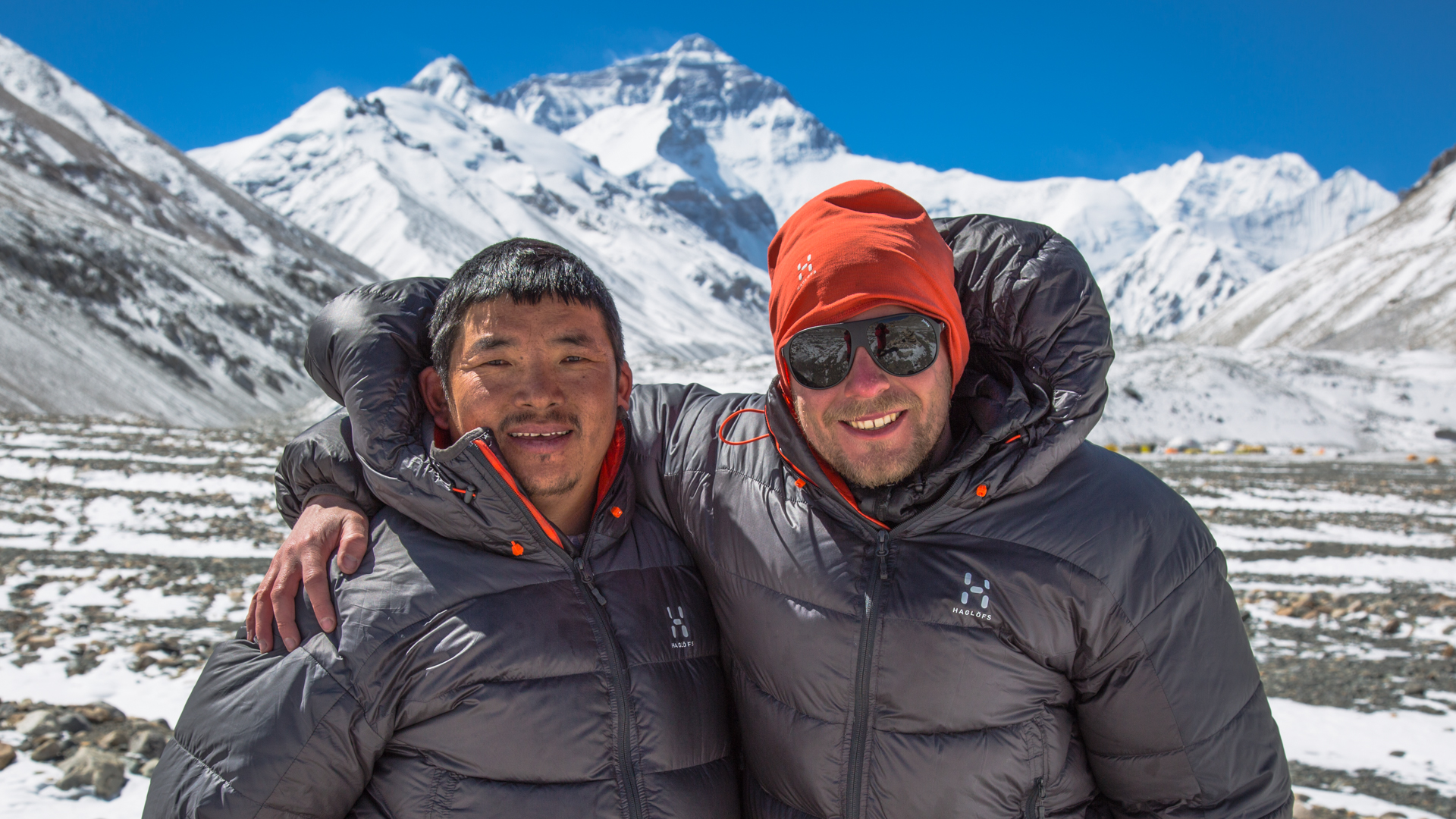 It doesn’t sound nice at all?

One has to be quick there and catch your breath afterwards, ha, ha. But it’s beautiful as well.

You have guided tours on the mountain, how far up do you go?

We go up as far on the mountain as we can without having to start climbing. You reach the base camp from where all the expeditions start. It is a seventeen day tour; you start by landing in Kathmandu, Nepal’s capital and visit some sightseeing’s. Then you go with a small propeller aircraft to a little village called Lukla. You land on a cliff ledge and get picked up by yaks and carriers. And then you walk up all the way to Everest and sleep in the Sherpa villages. My friend Chhiring is with us and it is good since he grew up in the area and speaks the language. The tour has been appointed to one of the world’s most beautiful hiking trails and I totally agree.

What would a couch potato need to consider if he would be interested in going on one of your tours?

You don’t need any knowledge. There’s no climbing involved, just ordinary hiking. You would need to be used to walking, but you don’t have to be a superman.

Did it ever happen that someone started hiking and then tried to climb the mountain?

No, no. People are usually happy, it is high. However the two last tours we hired a helicopter and flew over the ice fall and we could see the camp sites and the pike of Everest.

Your equipment consists of oxygen and an ice axe; you also have something called jumars and prusik sling. How would you explain what they are?

A prusik sling is a rope sling that you can tie, I have several of them. On one of them I have a safety hook on that I can tie the other ropes in. If you would fall when you cut off the jumar, which is a handle that you have on the rope and which you can feed upwards but it locks downwards. You would be hanging in the handle.

Is it similar to the one you have on a safety harness?

Exactly. But sometimes you have to remove the jumar to swap rope and then you have a second safety so that you are safe all the time. I fell through a crack at Cho Oyu. I had very capable people around me that could help, but if you were to be alone you must be able to climb up the rope that is safe. That’s when you use a prusik sling and stand in that. You have two slings and put your weight on them and feed upwards. So there are many different areas to use the prusik slings.

Is there a mountain you wouldn’t want to climb?

I haven’t found one yet. K2 which is in Pakistan is one I think is beautiful and the challenge appeals to me. But after this year I feel very happy with Everest.

The nature experience is one thing and then the self-realization. I used to be very shy and thought most things were scary when I was a kid. I have tried to challenge myself and looking back on my travels and all the experiences, all the people I have met and I have learned s much. Not just the climbing but to have lived in other cultures and met people that you think are so different from you and discovering that they are quite similar. It is a very social job. Many believe that climbers are hermit, but I like to spend time with other people.

Apart from the inexperienced that’s in your way towards the pike?

Exactly. They cost me half a cheek. I had a major blister on my cheek. I had to stand and wait, but it looks good.

You took part in a puja ceremony, what did it consist of and what was the purpose?

Chhiring who I climb with is very religious. He believes that inside all of these high 8,000 metres mountains there are Gods living. So prior to you climbing the mountain or the God you ask for permission. You built a stone pyramid and put a pole in it and tie a lot of Nepalese prayer flags on it. Then you sit next to a lama and pray for different amounts of time. Afterwards you receive a red ribbon around your neck to show that you are blessed. I have done this so many times now and it’s gone good, so I will continue with this. It would be foolish to break a winning concept. But it is so awesome and beautiful when you are in these grand environments. I still don’t understand much of what is said, I just do what Chhiring does.

Then I better understand why they get angry about littering the mountains. It is like throwing garbage at their Gods.

Absolutely. I am an ambassador for this project called Saving Everest which started in 2011 when the mountain was cleaned from six or seven tons of garbage. Everything was brought down to base camp on the southern side, but the problem of how we would get it down from there remained. Then the Sherpa’s came up with the idea of making souvenirs as art from this and sell it to tourists. In this way we receive money to the project and they are carrying the garbage down for us. Three souvenirs/artwork was brought to Sweden and sold for quite a lot of money.

Svip.se would like to thank Robin Trygg for sharing his thoughts and look with envy at the pictures and longing to go there.