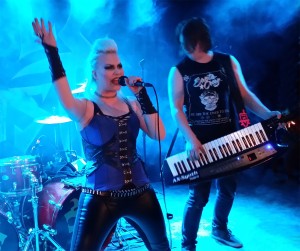 The Finnish band Battle Beast is on their first headline tour and gives four exclusive gigs in Sweden during four days. If you haven’t listened yet, make your move and buy their latest album Unholy savior! This band is equally as good live as they are on CD, and doesn’t leave a corner of the premises unawed. The singer Noora Louhimo is fearsome and the band gives an acclaimed show, full speed from the start till the last note in a genuine metal spirit.
A longer interview with Noora will be published in short at www.svip.se
The band is in the line up for Sweden Rock this summer, definitely a band worth seeing! 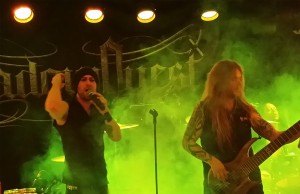 Shadow Quest is the opening act during a four day tour together with the Finnish band Battle Beast. svip.se travel to Närke County to listen to and experience Shadow Quest’s second gig together ever! Sounds really whacked I know, these guys are no rookies, but a group of heavy guys with substantial resumes prior to this line up and the debut album Armoured IV Pain. An interview with the drummer Ronny Milianowicz is available in Swedish and English at www.svip.se published on January 26, 2015.

Good music in all honour but the residents of Örebro is nowhere to be seen. Sure it is a Thursday, but I find it hard to believe that any day of the week would make any difference when it comes to the influx in this city unless it is the “right” place and politically correct to show up. Well, well… I am just going to say to you who didn’t show that Shadow Quest is a band to count on in the future! Great songs through and through, spiced with play of joy that I hope they will contain. Still, there were a substantial crowd of fans who found their way down to the basement venue at Kulturhuset and these happy visitors didn’t leave the premises disappointed!
New possibilities to see Shadow Quest at Metall Svenskan on 29-30 of May.

A huge thank you to Nikija Event AB for a good idea and initiative!