Slangbella is a solo project signed Anders Alexander – with a background as a song writer and drummer of the well qualified, world touring band Alice in Videoland.
Anders has also made a few interventions during some gigs with Melody Club or been a “temp drummer” as he says himself. Med Slangbellas’ two critically acclaimed albums “Slangbella was here” (2012) and “Kött och blod” (2014), and now the single “Någonstans i Oskarshamn”. Svip.se felt it was about time we found out a little bit more about Anders’ plans for the future.

You were a part of Alice in Videoland?

Yes, I was one of the founders of the band and wrote all of their songs together with the singer.
We made four albums and toured around Europe. We went to Russia three times together with Belarus and Ukraine. So it was a pretty big thing that we did for eight years.

The thing is that we made over four hundred shows and toured a lot, so I got tired of it and simply had enough. I wanted to do more than just play the drums, as I always have had so much music inside of me. So I put Alice to rest for a while. I have a recording studio and I play all instruments myself, and I thought to myself, what am I going to do now? I was very close to having a creative damp. So when I didn’t make music for Alice n Videoland any longer, I thought I had to try something new by myself, and then it hit me... I had never sung, I never tried to. But why would that stop me? I decided to try it out and I thought it sounded like crap, to begin with anyway ha ha. Then I realized I didn’t know how to sing, or what I would sing, I had nothing to say. I started out singing in English, but what I sang didn’t mean anything. So I realized that if I sing in Swedish, I might have it easier to express myself, and that suits my voice a lot better. And so that’s how it went. There have been two albums and there’s more coming. And I have realized that life is so much more boring without music, so we started up Alice in Videoland again.

So you have two projects now then?

I do doubles and have had double tours during this autumn. Next year I am going on tour with Alice in Videoland and Slangbella. We’re going to the UK and US, so I will have my hands full.

Why not have Slangbella as an opening act?

Well, I don’t know if that would be interesting for the UK and the US, if I sung in Swedish. Although, I did think about it for Sweden. I did have some other great opening acts, such as De lyckliga kompisarna and The Sounds.

So you could say that you have done a bit like Phil Collins? Put the drums behind you…

Oh dear God! Ha ha. That would be the only connection between us; he is not an inspiration to me if I put it that way… David Grohl has done the same thing and it would probably sound better to mention his name. It is in itself not a role model.

Your lyrics, are they a reflection from your own life?

Yes, they are. When you have been into music for as long as I have, you still collect a lot of thoughts. So when I started to write lyrics, it just came out a mixture of treats, experiences and all sorts. So there’s a lot to pick and chose from. If I didn’t experienced it myself there’s always something going on within your close circle.

You only just released the single “Någonstans i Oskarshamn”, will there be a full album in the future?

It’s not really decided. We’ve talked about just releasing single songs but often, so we’ll see. There will be another single release in February, which actually is the best song I’ve ever written. I am so much looking forward to releasing it.

But it will only be digital releases?

Yes, although my dream is to release a vinyl. I collect vinyls and have done ever since I was a child. I love vinyl. But it is too expensive, so pressing one single wouldn’t pay off. So as it looks at the moment, it will be digital.

So the plan it to release singles now and then to create attention?

Yes you keep it interesting. It’s a lot of work to put together a full album as well, and then it is just news for about two weeks since there’s new releases all the time. It is easy to be forgotten. That’s how it went with my last album, I had spend a year working on it and then people only remembered it for a few days and it was forgotten. And I didn’t have anyone to do the marketing for me either.

Were your previous albums just digital or were they available as physical material as well?

It was all digital. It is a matter of cost as well, as I do everything myself. Or has done up to now. I record, play all the instruments, mixing and producing. I pay for it all, so this has become a financial disaster to me.

You don’t really get rich on this. I believe we have six million stands in average on Spotify if you calculate with all of the songs. I might have received a few hundred kronor per every six months, just to pay tax on, and I am the song writer.

Do you remember the first vinyl you bought?

It was during the 80: s and it was a Judas Priest album. Which one I can’t remember, but it was only hard rock when I was about seven or eight years old.

Any trace of that in your own music?

I feel that the singer Rob Halford is bizarrely fantastic. But it’s not my genre at all anymore. At the moment I am collecting music from 1965 – 1973. And that kind of music I discovered quite early. Bands such as The Who, I started to listen to when I was about twelve years old. The kind of 60: s pop and rock has formatted me much more than anything.

I never really listened to punk music. My older brother was a punk rocker. You can’t really control what you write. I think the punk sound comes from my voice being unpolished. If Måns Zelmelöv (winner of the Eurovision song contest 2015) sung one of my songs, it wouldn’t have sounded as punk at all. Currently I am listening to German psychedelic jazz from the 60: s and that doesn’t really reflect on my own music.

Is it perhaps that you make one kind of music and then listen to another kind?

That’s it. I like variation and I don’t want to do just one thing. When I get home and want to put my feet up, I want a totally different kind of music then the one I am playing myself. 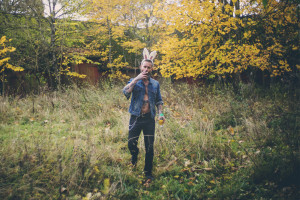 Your lyrics has been described as tragically but yet comical, do you have a special inspiration for that?

My life is pretty comical. Det blir mycket dråpliga grejer. As person I am quite uncomplicated. I’ve never had anxiety or any feelings like that at all and I like to laugh. So it’s a mixture between the insight of the tragically and the grey everyday life with a glimpse of humour.

The name Slangbella (Slingshot), where does it come from?

I dreamt it. It was after I had quit my band Alice in Videoland, I dreamt I met a girl who was called Isabella. She sang and I was playing and we named our band Slangbella. After that I kept the name in my head.

Are both bands booked?

I have a few shows with Slangbella myself and as an opening act for The Sounds. Then during the spring of 2016 we will release an album with Alice, and we will visit the UK and the US and try to time it all in. There will be few shows at festivals with Slangbella as well.

Will you release a album with Alice in Videoland?

Yes, we are quite established and I don’t really have the time to be up-to-date all of the time. It will be released in the US and all over Europe, so it will be a bit different. The market for Slangbella is within Sweden.

svip.se wishes Anders Alexander all the best with both of his bands and thank you very much for your time.