The encounter between a writer and a musician resulted in that the latter all of a sudden was playing in a band with his idols. How did this happen?
Curious as we are at svip.se, we rung the lead singer of The Crunch.
We managed to get a hold of Sulo, which is his name, in the middle of him combining song writing with watching the cross country skiing in Falun on the TV.
Undersigned has no interest what so ever in cross country skiing and was therefore unaware of the situation.

The seed to the birth of the band came about when Sulo and the writer Petter Karlsson was out collecting material for a book. We asked how the book came to a reality?

Petter had previously written a book called “Drömelvan”, (The Dream Eleven) about his favourite footballers (from his settee). He made portraits of his old idols.
We met at the book fair and noticed that we had the same interest in football and music and decided we should do something together. A kind of Drömelvan part 2, although we should swap the footballers for musicians, and preferably the ones you didn’t know where they’ve gone. And Petter thought I should record a song with each musician.

One publishing company liked the idea and we went on a road trip during eight days and made fourteen portraits. This resulted in the book with a belonging soundtrack. I played with Anton Robinsson, Jonsson, Robert Wyatt and all kinds of people. 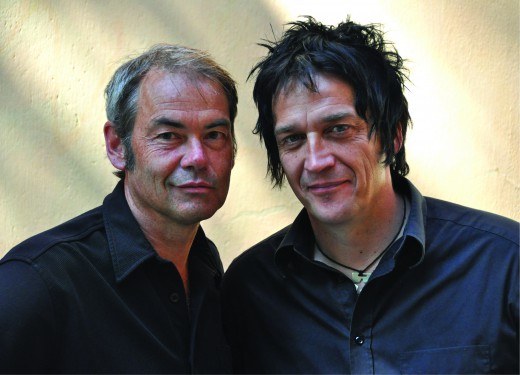 Is the book still available?

It is currently a part of a pledge campaign for the new Crunch album, and you can buy it via The Crunch Community Music. The book is only available in Swedish, but we are hoping to have it translated into English. Buy the book and you get the album too

And as a result of the book, a band was born?

It started with a release party for the book. We tried to have some of the people that were in the book over for a small concert at the release, and Terry Chimes, Dave Tregunna and Mick Geggus showed up…
Terry hadn’t played drums in over twenty years, not played with Clash since November 27 in 1982 when he played his last gig with them. That was in Jamaica, and I have it on bootleg, ha ha, which is a bit strange! He said that he wasn’t going to play any Clash songs out of respect for the band and Strummer because he had past. So I thought it wasn’t going to work out, but then he said that he would do it for me. So we did White riot, Caribbean… That was huge!

And that was the birth of The Crunch. Afterwards Dave said: Lets start a band? How do you mean? I said. Mick and you and Terry on drums. Terry felt he was back, and that was how it begun and a few months later I sent three, four demos over to them and that resulted in the debut album "Busy making noise" 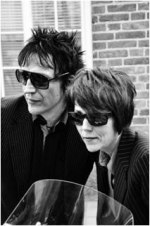 When did Idde Schultz come into the picture?

She came along during the recording of… Busy making noise.
It was a duett that I was going to do with another girl, but it didn’t come out right.
And since I have played with Idde previously, her name came up, Idde is the best you know!
So she recorded the song and we did our first concert, Idde had never played outside of Scandinavia before. So her first gig outside of Scandinavia was in a sold out The Garage in Kensington with The Crunch…

That’s when it hit me, what a band I had put together!
All these musicians were my childhood idols and I was to be the front act, and with my own material. We finished the concert with Garageland, which is Chime’s favourite Clash song,
So that was the beginning to all of this and now we’re on the second album. I live in a fast world!

The Crunch are also playing at the opening night of the documentary about Joe Strummer on March 25, please tell me about that…

Right, it will be a lot of fun because Mick, Paul and everyone will be there. It will be a mixed set, half Clash, half The Crunch. It will feel extra special to stand there with these geezers in front of the others. It will feel weird…

You call them geezers, may I ask your age?

I’m 45. The funny thing about these guys is that they are just the same as they were back then. They like and dislike the same music. They loathe Emerson Lake and Palmer.
I asked Terry what he thinks about The Damned, he said nope, we’ve never listened to them.
How come? I asked, no because Rods said they sucked and then we never listened to them.
Okay, what about the Jam? We thought they were good but then we ended up in a fight with them, and after that we didn’t like them anymore…

I am such a geek and I had to do research about punk music and how it started with the hairstyles and so on, guess I am living my boyish dream. 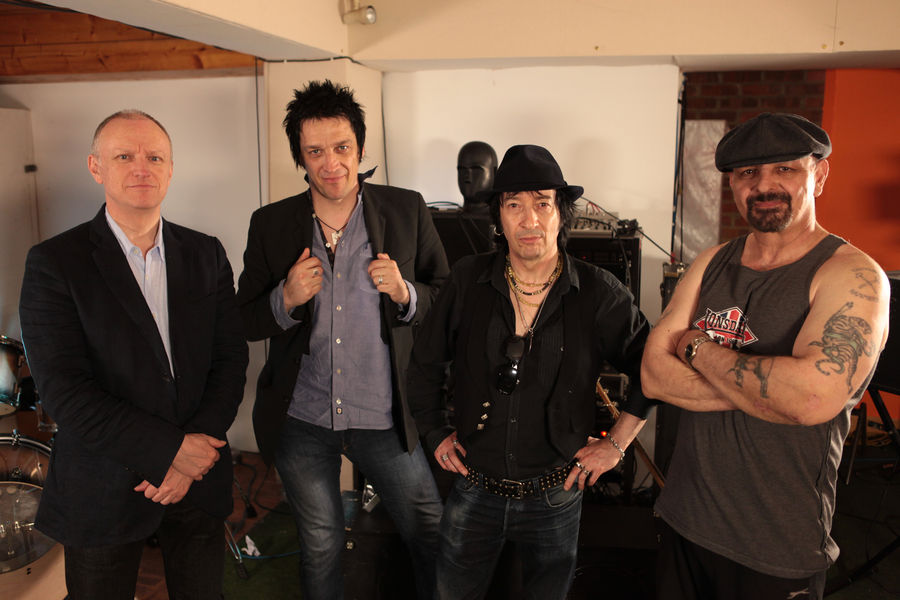 Did you also do research on how the political climate were in Britain during that period of time?

That was what the revolt was about, right?

Yes and it’s like that today as well. The East end where Terry and Mick are from has been the poorest part of Britain for over four hundred years. There’s a difference between Swedish and English music in that way, especially regarding punk music. English punk is like Premier League, Swedish punk like Allsvenskan (the Swedish football league).
That’s how big the difference is. A lot of it is because they are playing for their bread.
Sweden has had injustices but never needed to play for their survival. To the British, the music was a chance to get out of the misery. I am a bit surprised over the incredible energy they have when they play, and how they deliver you know, although they are older than the Swedish…
I mean what do we have in Sweden? Thåström, yes that’s it.

On the other hand, his song “Du ska vara president” is full of bass lines from Clash.
When Ebba (Swedish band) released their first album, the Clash released London Calling, so there was a certain difference in how fast the development went.

You want to involve your fans to get the album finished?

Yes, we were invited to do this pledge, there are several bands that have done it. We went to a meeting with them and asked how it was done. You aim your music to reach the right target group, and so we said we’d give it a try and see how it works. We have had a pretty good following in a short period of time.
The reason why we are playing at this film is that our music has a function in it.
There is no band that sounds like us. This is probably why things have gone so good for us so far.

We have a release party on April 29; I believe it is, in London. After that we’ll see if we end up in Sweden. Sweden feels like… it might work out, we have raved for… a lot of retro searching when it comes to hard rock, but the punk music has not been administered in the same way.

We were invited to the Rebellion in Blackpool, to the world’s first punk festival where we played, it was jam-packed. Charlie Harper in the UK Subs came up to me and said it was a pity that we were playing at the same time, since he couldn’t listen to us. That was big!

This will be your second album then? Is it in the same style as the previous?

There is always a difference. The biggest difference I believe is that we know our sound. Then you can write songs after that fact, rough is rough and soft is soft. Better dynamics. We have managed to make a better second album compared to our first, regarding the songs, which I can say since I am the song writer, ha ha! I am very proud to have succeeded to make and refine the sound and manage to make it to what we’re good at. We play power pop punk. But not the kind that the Hellacopters do, but more of the British kind. I say we British, but naturally I am Swedish.

There was an incident at the recording studio and Dave said: we can’t use that cord, we are British for fuck sake! But I am Swedish… No you’re not he replied.

Will there be a tour after the release?

In the autumn. In October we travel in Britain. This summer there will be festivals. We have not planned for Sweden, but it will be Spain during the autumn.
We have had many requests from all over the place. US and South America, but that’s all I know right now.

How do you feel about the digital development?

In Sweden it’s a catastrophe! We have such good Internet connections!
It leads to poor quality. If you don’t earn money on the albums or your music, you can’t spend money on your production either. Thankfully, they don’t have such good connections in Britain, US or Germany, so the physical sale of an album is still large compared to Sweden.
In Sweden there’s a lot of music being down loaded, there’s a whole generation growing up listening to music via their mobiles. The sound quality suffers from that. They don’t even know which artist they listened to when they stream.
It’s nowhere near the physical albums, and I don’t believe in it.
I am proud to say I don’t have Spotify. No, you should buy the albums! I buy both CD: s and vinyl and I will continue to do so. I don’t download books either; I read them as they are.
That’s my thing!

svip.se would like to thank Sulo for his time and hope to be able to get back to him again, as we know he’s got his hands full outside of the band The Crunch.