Hi there, I am Auntie Antique.
I will from now on write about a lovely blend of antiques, old things and some bric-a-brac. To me, the old and used is beautiful and something one should look after. To look after old things properly there are some things you need to know about. I will also give some advice and ideas that I hope you will find useful. Most things I have learned through curiosity and experience, the rest I have read and learned about.
What is the value of the items? The answer to that is not always easy to give, since it is a question of supply and demand, and this determent the price. The value therefore varies a lot. The items are much more expensive in an antique shop, then what you can get if you were to sell them yourself. The prices I write are approximate prices.
As you have probably imagined, my love for old and beautiful things is deep and has been an interest since my youth. To pick up a real bargain is not just a lot of fun it is actually a way of cherishing the environment and to help decrease the garbage mountain. Garbage to one person may be invaluably to someone else. Besides, it is often quite cheap too!
Since Christmas is around the corner, I will start by writing about Christmas decorations and gnomes from old times. These Christmas items are a trip down memory lane to me and probably for you as well.
More and more are collecting the old Christmas decorations and their value increases every year. Perhaps you too have a valuable Christmas item in your cupboard? Yesterdays Christmas decorations are very popular and trendy and the demand for second hand items from the old days are appealing to many. Someone looking for Christmas decorations from the past might be lucky and find rare items at the flee market, at an auction or in an antique shop.
To light the first candle of advent is a lovely feeling – especially if you have an old candlestick from the past to take out from your cupboard. And who knows, maybe your dearest Christmas item is a gem!

The picture displays an old wooden electric candlestick from the 40: s the value is about SEK 200 together with Lisa Larson’s Advent Child that came during the 70:s and has become a classic, circa SEK 700 per item, and the Advent pig from 1965-71 with a value of between SEK 1,900 – 2,700.
And what about decorations to the tree? History tells us that around 1870, the Christmas tree candles were introduced in Sweden. The first version used was candle holders made from spiral twisted iron thread with counter-balance to hold the candle upright. During the 1870: s a more appropriate variant was invented in Germany, it was a blank holder that squeezed around the branch. Christmas tree illuminations were advertised already back in 1890 but since few people had electricity, the sales didn’t take off properly until the end of the 1920: s.

Old times Christmas tree decorations mostly consisted of paper garlands and Christmas crackers with wrinkled fringes also decorated with bookmarks. Figures made of icing, yarn gnomes and baskets made of braided shiny paper stripes occurred. All of theses items were perishable and was often thrown away when worn and torn. The shiny glass baubles are still going strong within the Christmas tree fashion. These gems mainly came from the glassworks in Germany, where during the 1820: s had a lively industry. 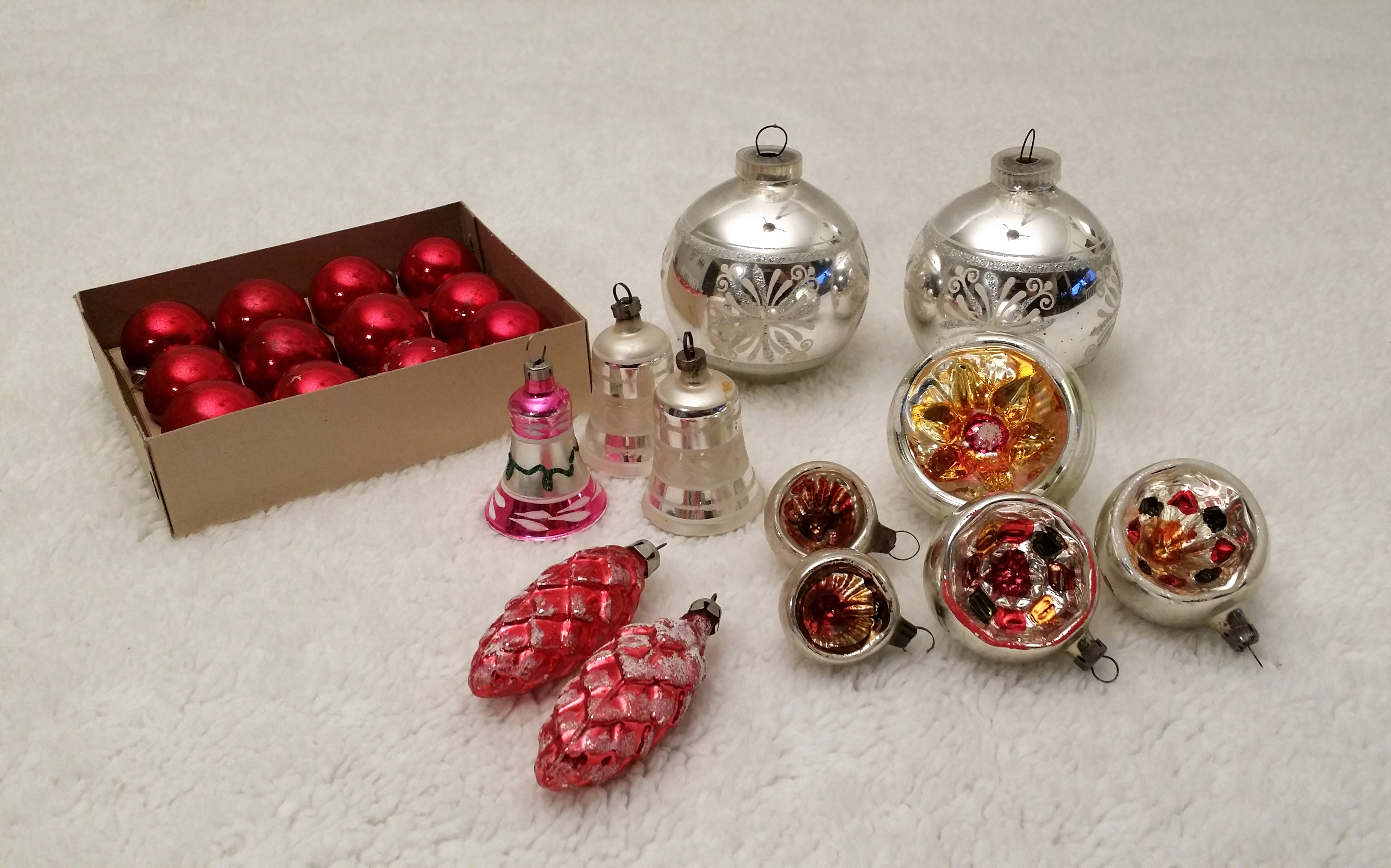 It is fashionable with theses old Christmas tree decorations. They are hand made and in glass and manufactured around 1940 to 1950. The value of the whole collection is about SEK 400.
So how was it with the gnomes at the loft, do they exist? Yes they do if you are to believe all of those who collect and love the gnomes. Now it is time for all lovely gnomes to come out from the cupboards and boxes. As a result of more and more people is collecting the old gnomes, their value increase with every year.
In time for Santa, did you know...?
...that the first distributor of Christmas gifts wasn’t Santa Clause but the Christmas buck, a person dress up in an animal skin and with a mask of a buck or goat if you prefer
...that the oldest gnomes have dull colouring in grey and brown together with a very detailed beard
...that it was the Swedish artist Jenny Nyström that made the red caps popular. During the 1890: s the sweet and kind Jenny Nyström gnomes and Santa’s appeared and with her lovely Christmas cards she made Santa popular in both Sweden and abroad
...that during 1930-50 Santa’s printed on lovely paper or on garlands appeared and could be purchased in sheets or garlands
...that many ceramic Santa’s was imported from Germany between 1920 and 1960. Their appearance was human and they often held things, many were smoking a pipe. The colouring was bright - red caps and clothing in blue, green, red or brown
...that many of the older ceramic and china Santa’s are lacking the stamping. A little something to keep in mind is that the ones that are stamped with import are made before 1950. 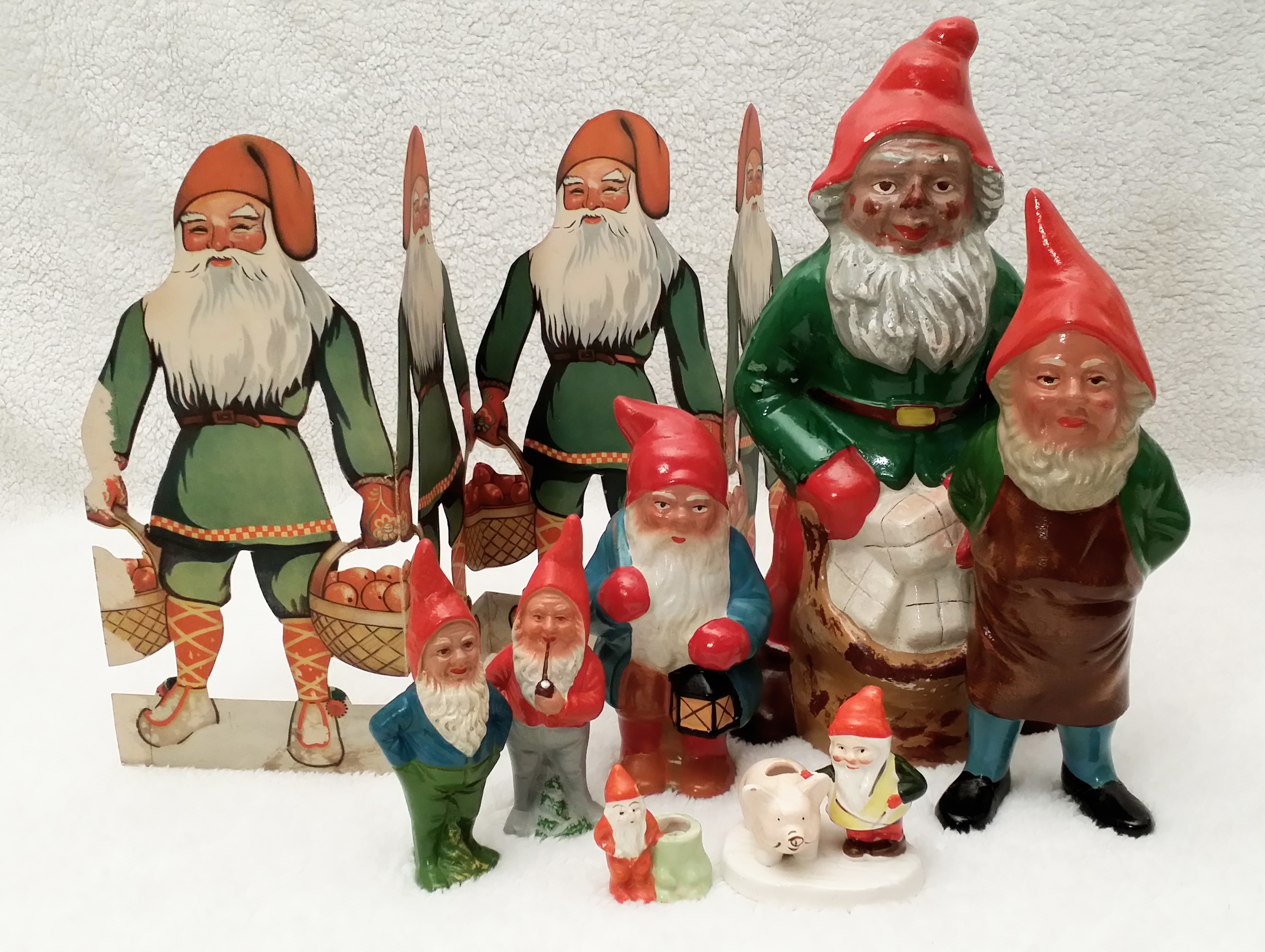 The Santa garland made of cardboard from the 1930 to 1950 is suitable nearly everywhere, their value is about SEK 100. Other Santa’s from the beginning f the 19th century together with their value depends on size and condition. Larger Santa’s have bigger demand and therefore more valuable. The small Santa’s in the picture are worth about SEK 250 – 400 and the bigger ones around SEK 500 – 1,000.

I do hope you have had some inspiration, now get yourself out there and make some bargains or take out what you already have!