Ryan Roxie who is guitarist in Alice Coopers band have realesed his own record.  But it aint the first time this rocker who lives in Sweden have done it.

You had a band called Roxy 77 together with a hidden track 77 and on the cover of To Live and Die in LA, there is also the number 77.  Why all these 77?

How the heck did you find out about that? (Laugh). Well, there’s been a fascination with the year 1977 ever since I was a little kid. ’77 was the year that basically  made me want to become a rock n’ roll guy. There were so many bands that I was listening to at the time, that either put out their first record, or put out their best record during that year. Some of my favourite albums from that year there was Queen, News of the World, I’m a big Queen-fan, also the first Sex Pistols record came out that year and also the first two Cheap Trick records came out that year and that’s how it all goes back to this solo-album where I had the lead singer of Cheap Trick helping me sing on a song on it. It was kind of cool to have one of your childhood heroes guest on your album all these years later.

But you never played together with Queen?

I actually did, I played with Brian May. He’s the guitarist of Queen and one of my favourite guitar players. He played in a small club with us and we jammed and he actually played on my guitar. Then a few years later I got to actually play on his guitar back stage, when he came and guest stared with us when we played at Wembley in the UK. I play guitar for Alice Cooper and we sometimes have  special guests coming up and playing with us.

When I look at the cover of the single To Live and Die in LA. It makes me wonder if you like video games, like GTA?

The reality is that my fifteen year old son loves video games and that game in particular was kind of very popular for him a little while ago. It’s kind of like a retro video because for gamers, it’s always about the new game, so this is more a kind of a retro game idea with the cover. And if you check out the lyrics video on Youtube, you’ll see that the entire video is based around the GTA game which is based in Los Angeles, so it works out with the lyrics of the song perfectly.

(Laugh) I think that if I got him a game from 1977 he wouldn’t know what to do with it! If I did, it would be Pong (one of the first ’video games’ ever produced). Even though I like Pong, I mean who doesn’t, but I think that a fifteen year old would get bored pretty quickly. It’s all about the graphics these days, no?

How come you live in Sweden?

(laugh) I guess you come for the weather but you stay for the taxes (laugh). No, I think it’s the typical story, I live in Sweden because my ex is Swedish and we have 2 kids together. I now have a South African sambo who ironically looks more Swedish than all of us (laugh) and just so you know; South Africans are tall and blonde as well (laugh).

You give guitar lessons?

I have filmed a bunch of series of online lessons with a company called; Playalongmusic.com We offer give the first month of guitar lessons for free. My whole mission now, not just making this record and putting my guitar music out there but my overall goal is to get more people to play guitar. Less headphones and mixers and more electric guitars in people’s hands, that’s what I’m saying.

You are playing with Alice Cooper, you were supposed to play with him for one year but you are still with him?

Well I mean it was a one year tour that we started way back when Alice wanted to test the waters again in 1996 and see what it would be like for one year. As it happened he’s been touring every year since then, I have gone on to do different things here and there with different musical projects, three albums on my own and  worked on this new solo record, but yes it’s pretty crazy that today we still play together.

So there are no hidden tracks on this record Imagine your reality?

Here’s the thing, the idea for that was that it was only supposed to be one hidden track on any album that I put out and that was the track 77. You obviously found it, so the secret has come out years later. But when we released it, it was hidden. With this new album the thing that is different is that we have put out golden tickets. You know the movie Willy Wonka and I’m not talking about the Johnny Depp version, I’m talking about the old school version, lets just say that it was 1977 version of Willy Wonka with Gene Wilder even though it was probably 1975 (laugh). That movie made a big mark on me as well and so on this album we are sending out golden tickets to people that pre-order the vinyl so they will be used as special things like surprise meet and greet’s or maybe you’ll be able to get to some sort of secret show during out the year, if you have that golden ticket.

You’ve been in the business for a long time, what do you think about the changes now when people are listening to music digital?

The biggest change for me, the thing that blows me away and the thing that makes me turn my head sideways and scratch my head is that people in today’s world don’t really feel that they should have to buy music. Because of all the streaming channels and downloading services, music is just more of a free commercial or promotional item these days. Some people seem to have a problem paying for music but they don’t have a problem paying for a T-shirt of the same band. Why wouldn’t you pay for the thing that took way more time to create (the record) rather than just a shirt? But at the end of the day, it kind of evens it self out, because if someone wants to listen to my music on Spotify, all the power to them, because hopefully when they come to a show I will put on a good enough performance that they will buy the T-shirt.

It’s not a bad thing for us independent guys, for us guys that’s have been around for a long time. I have a good relationship with my folks so when I do put out vinyl and CD’s, they actually do buy them because they understand that’s what is most important to me. They buy the music and then play it and tell people about it. But for new bands now days, I think it’s harder for them because they don’t have the luxury of a record company with lots of money able to promote something. But the future of music is up to the new younger bands. It has to be new guitar bands coming out soon so that they can drive the business forward. More people need to be playing the guitar because some of those people will go on to join and form great bands and when bands come out that will influence more people who will all go out and buy guitars and so on. That’s how we will keep rock n’ roll going and evolving.
The one thing that is constant is six strings and plugging into an amplifier and blowing people’s minds with the sound. It’s more of a social thing too because with less bands, it means less concerts and there would be less places for people to meet socially…If you don’t support guitar driven music you kind of like saying no to society! (laughing)

You have some influences from The Beatles and Oasis?

Yes. I always say that I am influenced by any band that was influenced by The Beatles. So when you talk about my biggest influence, I kind of think of The Beatles as the Godfathers of rock n’ roll in so many ways. They were like the kings of rock because they influenced so many different types of styles. Other bands influenced by the Beatles include  Cheap Trick, Aerosmith, Oasis and a band from Canada called Sloan as well as pretty much every band I’ve ever been in, including Alice Cooper, who’s also a big Beatles-fan. 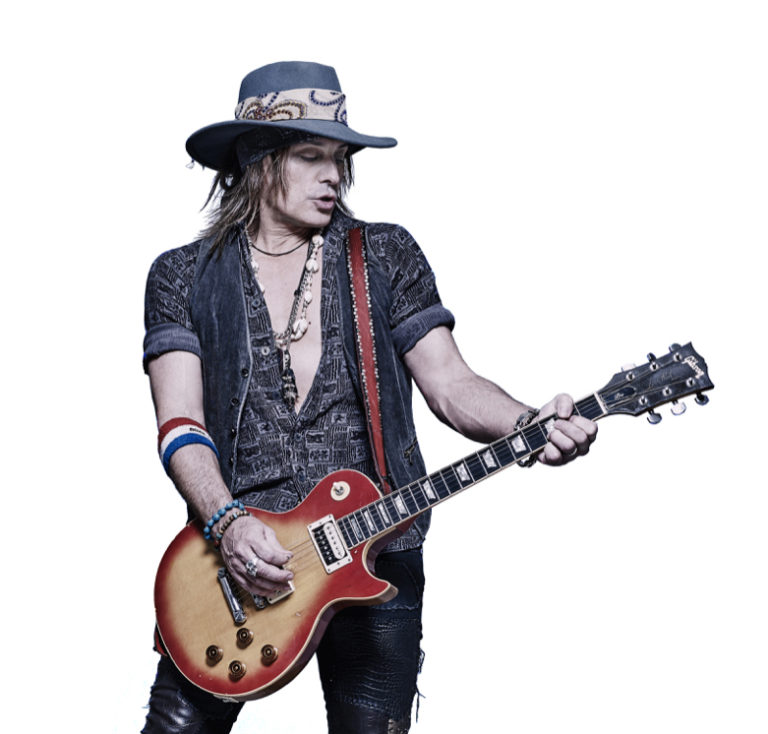 Alice Cooper also has different sounds from over the years…

He definitely does, and that influences my own record. If you listen to all ten tracks off my new album, you’ll hear blues, rock, punk to straight ahead riff rock etc.  I think because I’ve played with an artist like Alice who’s been around for so long, he’s influenced me to include many different styles of music. If you’re looking for ten of the same types of songs, you’re not going to find them on my album.

You have one track, California Man that was a Cheap Trick song…

Did you put of lot of time and effort into how you placed your songs on your album?

Yes I did. Luckily, I work with a great guy who runs the record label, Bellyacherecords.com He’s worked in record stores for over 30 years and he’s so into vinyl packaging and in getting the song selection just right so I think that when you listen to vinyl it’s different to when you are listening to Spotify.
At Spotify you listen to whatever is most popular and what is usually at the top of the list of whatever artist you’re listening to, so you could be listening to track 1, track 10 to track 6. Whereas when you’re listening to an album, the experience is different. You want the album to take you from one point and leave at another and the song selection and the order that you put the songs in is very important in that respect. I’ll give our record company CEO Scotty a big congratulations on getting our song selection in the right order.

Track number 10, God Put a Smile upon Your Face; personally I think it’s Ryan who put a smile on the listener’s face…

(laugh) Thank you! You know that’s another cover and very few people have been able to guess what band it is on first listen, so I invite you to go and check out the album. It’s ten songs, ten guitar solos but you can get through the album in one sitting and when you listen to that last track, remember that’s a cover too….. so which is the band?