Sometimes you stumble over things you think sound interesting when surfing the net. A band name like Atari Ferrari got me curious. Formed originally as a one-night-only Bowie tribute band, Atari Ferrari rises from the ashes of longtime Spokane rockers, The Camaros, paired with the more introspective songwriting of Matthew Joseph Hughes. Soon they release their second album, Rebel. Matthew let us know more…

How come you choose the name Atari Ferrari?

Atari Ferrari was Rob’s idea (our drummer). It’s a nickname for a Boeing 747 I think, and he’s kind of into planes and thought it sounded cool. It usually puts a smile on people’s face when they hear it for the first time. 🙂

I’m glad you picked up on the fonts. I’ve been using a lot of Kabel-Black, which was the main font for T.Rex, and a lot of Rolling Stone advertisements. I used the ’Iron Maiden’ font for Middle Of Nowhere because they took that font from the original poster for the David Bowie film The Man Who Fell To Earth. For the video, I wanted to try and bring that poster to life! 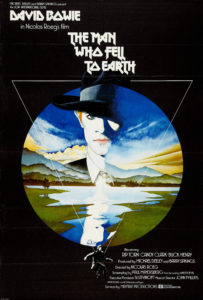 You wrote the lyrics, are they from your own life experience?

Yes, I write all the songs except for one on this new album. Usually I write from life experience, but most of these new songs came to me fully formed, in dreams. When I would wake up, I would have to rush to a recorder or pen and paper to make sure I didn’t lose the words and the sound (you know how a dream is quick to fade away, if you’re not careful). The first one that happened with was a song called Alice. It’s called Alice because in the dream, it was Alice Cooper singing the song to me. I was lucky to play two shows with Dennis Dunaway of the original Alice Cooper lineup, and I told him that story. He said it freaked him out a bit because he wrote a lot of Alice songs from his dreams, and that he had notebooks full of ”dream songs”. It must have been fate!

How long have you played togheter?

We’ve played together as Atari Ferrari for about 2 and a half years now – we originally came together for a Bowie tribute concert. I have been playing on my own for about 12 years, and I’ve released about 13 albums myself as Automatic Shoes. It’s a lot more acoustic based, and there’s hardly any drums.

Will it be a physical release of your record, CD or vinyl, or just digital?

There will be a CD and digital release. We’ll test the waters with that first before investing in vinyl. It seems especially difficult to sell any music at all, whatever the format, now that everything can be streamed online for free. I think our t-shirts outsell the music. Perhaps that says something about the state of the music industry, haha.

Do you have any idols that has inspired you?

For me, it’s Marc Bolan, Chrissie Hynde, David Bowie, Patti Smith, Kate Bush, Peter Frampton. Our other guitarist Eric would say Elvis Costello, Ryan Adams, Jackson Browne. Rob our drummer is all Led Zeppelin and Foo Fighters, and Scott our bassist is Soundgarden, Ryan Adams, and Arcade Fire. I think our influences mesh pretty well, and it keeps things interesting, because we all like to rock out, but at the same time we’re not opposed to some gentle songs too.